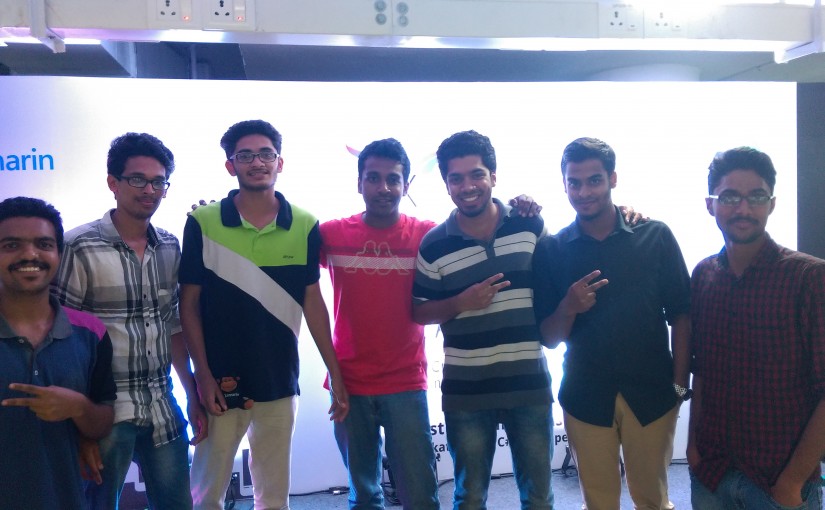 Ooops… I know I am very late to write about my experience at the second Xhacknight conducted by Xamarin Enthusiast group Xhackers and IBM Bluemix.

Let me tell the long tale of our journey. If last time it was Faheem who motivated me to attend the event taking decision last minute, this time I was ready to go at the moment when Nish messaged me they are going to announce Xhacknight.

This time it was my duty to bring more members to the world of Xamarin and motivate them. So I asked my friends to come with me.

The best of my friends ‘geeks’ and ‘jokers’ joined us, Thanks Shabeeb, Farshan, Sabeer, Athul, Yoonus, Marzook for joining me! After all having lot of friends at Hackathons helps to keep awake and have fun whole night! Also we made new friend Yash from Bangalore who joined with us ‘Mallus’ for ultimate entertainment!

Reached IKP Eden, the venue for Hacknight. I have no words to praise the venue, thanks IKP Management for providing us a wonderful and peaceful atmosphere to learn and hack. The event started exactly at 10:00 am with a Introduction to Xhacknight by none other than VidyaSagar, our friendly #gamedev who now works at IBM. Followed by Naveen Gupta, Head – Asia pacific Mobility group, IBM who introduced the range of IBM Services intended for developers. I was a firm believer that IBM always focused on their enterprise customers and did nothing for the normal developers out there. Naveen’s introduction corrected me! The part which excited me much was Ajay Chebbi’s ReImagine who works at IBM. The amount of energy in his presentation was high, the IronMan, Hololens and such stuff are not science fictions anymore, but reality. Introduction to Bluemix which covered what all services IBM Bluemix provides like Watson, Alchemy, Text to Speech, Speech to text, Personality Insights, Visual Recognition, etc. Complete Catalog of IBM Bluemix Service is here which was explained by Rajesh Jeyapaul. Next was Nish (Nishanth Anil), about whom I boast to my friends that he is one of the greatest Xamarin developer, and one who helps me always when I end up with errors in  my application.

His introduction to Xamarin and all its features was awesome and expectation given to my friends was met :D. Again VidyaSagar came up with Xhacknight’s challenges, Rules,the Rules & Code of conduct. We were split into three groups. We came up with an Idea, and got it approved by Nish and Vidyasagar. Assisting Visually impaired people to understand what is in front of them using IBM Bluemix Visual Recognition and Speaking out the result in order of priority was our idea. Started building the app, opted for Xamarin.Forms so that I can target all 3 platforms at once, More detail on how I developed the app will be published in coming blog posts. Being awake for about 30 Hours, developing application, debugging with help of  Anubhav (one who helps me always), helping other hackers out there, and getting help from them, It was result time.  Nobody can forget the awesome food and drinks sponsored by DropKaffe  and others. Indeed the Redbull gave us energy to stay awake overnight!

Time to submit our app, presented our project to panel of judges out there.

3rd prize goes to the CodeJunkie for his awesome IOT project.

2nd prize goes to none other than MY TEAM FANTACODE 🙂 Yea It was the awesome android phone One Plus One. Thanks Xhackers & IBM judging panel for selecting us. 1st prize goes to Match.AI, seriously it was a great project that nobody other than them can complete overnight.

I thank the awesome support team, who provided us Internet (Network Guy 😛 we named him) and rest of them for keeping all the hackers comfortable.`Looking forward for next Xhacknight!